The Nine Freedoms are a series of Cosmic Transmissions given by a highly advanced extraterrestrial intelligence known as Mars Sector 6, through Dr. George King – one of the greatest mediums the world has ever known. They were given on nine separate occasions in February-March 1961 – but are still every bit as true and relevant today as they were then, if not even more so. Fear holds us back – it prevents us from becoming the people we were meant to be. The key to freeing ourselves from fear is – knowledge, since “knowledge of the right kind dispels fear.” If we have the right kind of knowledge, we can change our mental outlook – from one of fear – to one of fearlessness. We can also combat fear by improving our karma by helping others. Another key to rising above fear is detaching from the limitations of our ever-changing environment. This does not necessarily mean physically leaving our environment – since we may be needed there in service – but rather that we should strive not to let environment have a negative effect on our state of mind. Note that fearlessness should never be confused with foolishness – there is nothing fearful about taking due care or necessary precautions. Bravery could in fact hardly be more different from foolishness – being, as it is, a key step on the path to wisdom.

This is much more than just the emotion which many people think of as love. It is described by Mars Sector 6 as a “natural energy, all pervasive, greater than mind”, and as a “state of whole being”. We cannot experience this kind of love – love in its higher sense – until we have a degree of bravery, and this love, as it grows, will in turn spur us onwards to ever-greater degrees of bravery.

Service is described as “love in practical action”. If we have a real, deep, genuine love for others, we will of course want to help them – and if we really want to help others, we will get the opportunity to do so. Service also requires bravery of course – and service is indeed the best possible application of bravery. And the more service we perform, the better our karma will be, which will in turn make us braver still, and give us greater understanding of, and mastery of, the wonderful power of love energy.

Listen to The Nine Freedoms podcasts

For a more in depth explanation visit The Nine Freedoms website, which includes substantial extracts from the words of Mars Sector 6 and from Dr King’s commentaries. 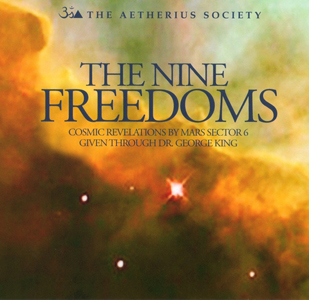