There will come a time when a Cosmic Master will come to Earth and walk openly among humankind for all to see. We do not know exactly when, or who the intelligence will be, but we have been told clearly that this will happen. 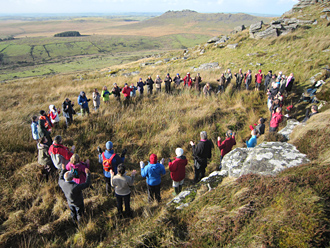 Pilgrims in prayer on Brown Willy, the holy mountain in Cornwall, England, where ‘The Lord’s Declaration’ was given to Dr. King by a Lord of Karma on November 23, 1958.

The Master Jesus, the Lord Buddha, Sri Krishna, and certain other great spiritual figures who came to Earth from other planets, underwent the tremendous limitation of being born into an Earth body and living among us, with only a fraction of their true mental, psychic and spiritual abilities. As a result, many have doubted, and continue to doubt, whether or not these Cosmic Avatars are genuine. However, their teachings alone should be enough to prove the caliber of these wonderful intelligences to any thinking person.

When the Next Master comes to Earth, the situation will be very different. He will come with all his powers, as a cosmic being, and will prove his credentials so that there can be no doubt whatsoever about who he really is – even to the most cynical of cynics or skeptical of skeptics. Following his arrival to this planet, those who persist in following a path of violence, greed etc. will cease to reincarnate here, and will instead be born onto a less advanced planet. Those who remain on Earth will then be free to build a new world of peace and enlightenment, unencumbered by the warmongers and materialists who have held the rest of humankind up for millennia.

This prophecy, known as ‘The Lord’s Declaration’ should be regarded as an inspiring message of hope for all spiritual workers. However, the message carries with it a great responsibility – a responsibility to help as many people as possible to be ready for his arrival. Prayer and spiritual teaching are two very potent ways to go about this. The Holy Mountains of the World